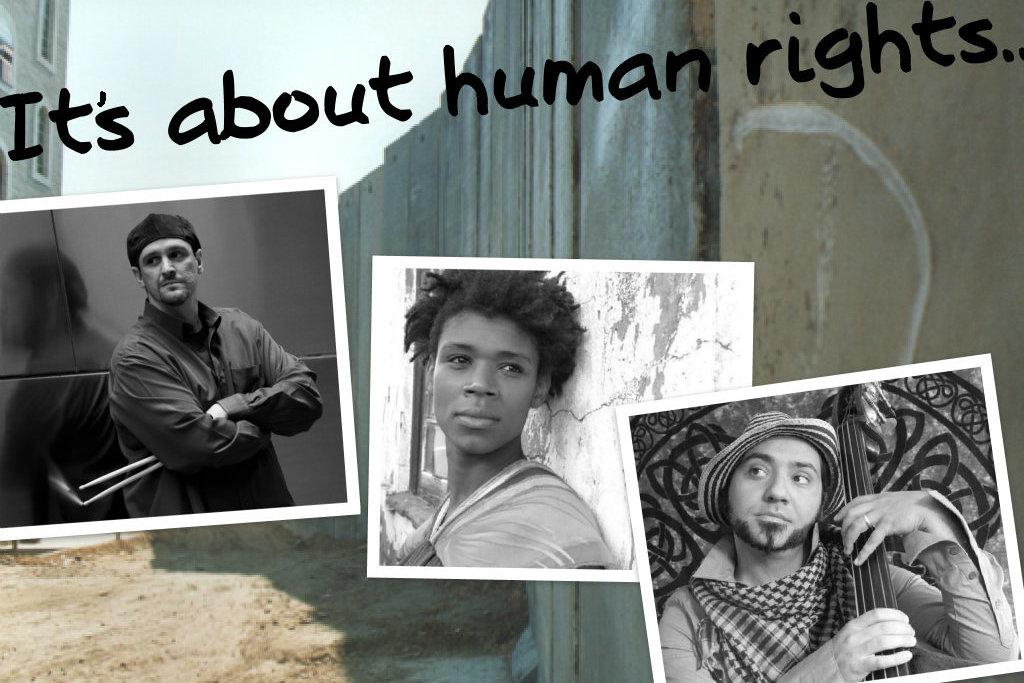 19 July ’12 Pictured against the backdrop of the illegal apartheid wall, Jazz singer/guitarist Carmen Souza (center), bassist Theo Pas’cal (right), pianist Filipe Melo (not pictured) and percussionist Mauricio Zottarelli (left) are all being asked to take a stand for justice.

We are a group of over 900 members, representing many nations around the globe, who believe that musicians and other artists can play a role in ending apartheid by heeding the call of Palestinian civil society and joining in the boycott of Israel. We also believe that by playing in Israel, artists are condoning the suffering of millions of Palestinians through conducting business as usual with that state.

All we are asking you to do is to first do no harm – to stay home, and refrain from playing.  It is up to you, and would be highly appreciated, if you would like to support and join the boycott movement by making a statement in support of universal human rights. Although some artists try to remain apolitical, surely you could not make the conscious choice to endorse the crimes of Israel’s government by playing in Israel despite the boycott, thus becoming a propaganda trophy on its shelf.

Carmen Souza, Theo Pas’cal, Filipe Melo and Mauricio Zottarelli, you are on the schedule to play on August 1 and 2 at the Kaminsky in Eilat for the26th Red Sea Jazz Festival.   Many people are unaware of the gravity of the Israeli oppression of the Palestinian people under occupation, the suffering of Palestinians in refugee camps and the severely curtailed rights of Palestinians within Israel.  We hope you’ll do some research before you board your plane for Tel Aviv and  that you will decide that human rights are not selective, they are universal, and you will want to choose to be artists of conscience.

Wilson’s tweets indicate that mainstream media have played a role in censoring human rights violations by Israel.  Media also is to blame for shaping a false positive view of the apartheid state.  Wilson was informed about Alice Walker’s youtube video taken in Gaza,  ‘Alice Walker – The Palestinian Spirit,’

… she was also sent Pink Floyd founder Roger Waters’ words in an article he wrote for the Guardian in the UK titled Tear down this Israeli wall: I want the music industry to support Palestinians’ rights and oppose this inhumane barrier. Cassandra Wilson took the decision to be an artist of conscience, her cancellation respected Waters’ words:

Artists were right to refuse to play in South Africa’s Sun City resort until apartheid fell and white people and black people enjoyed equal rights. And we are right to refuse to play in Israel until the day comes – and it surely will come – when the wall of occupation falls and Palestinians live alongside Israelis in the peace, freedom, justice and dignity that they all deserve.

In a letter to Wilson, Israeli members of Boycott From Within wrote:

Palestinian fans of your music living under the brutal military occupation of theWest Bank or the hermetic siege of the Gaza Strip will be prohibited from coming to Holon and enjoy your performance. These 4 millions who are being denied their most fundamental rights include many Palestinian women, whom the Isha festival will certainly not empower.

Wilson cancelled her performance in Holon, Israel.  The woman’s festival she was expected to headline, claimed to empower women, yet it was selectiveempowerment, ignoring Palestinian women.

The Palestinian Campaign for the Academic and Cultural Boycott of Israel (PACBI) which represents almost all of Palestinian civil society, reminds us that:

As performers congregate in Eilat to enjoy “Israel’s southern paradise getaway [that] provides a perfect setting for a unique experience of romantic beaches, fine dining and generous hospitality” [2], only a few kilometres away, the Gaza Strip faces electricity cuts and a suffocating economic siege; the West Bank remains under military occupation and intensifying colonization; occupied Jerusalem as well as the Naqab (Negev) are facing gradual ethnic cleansing, and the construction of the illegal apartheid wall is near completion.

Human rights are universal, they are not selective.   Principled boycott by leading artists such as yourself worked against South African apartheid.  As governments have failed or been unable to implement international law to end Israel’s crimes, boycotts can work today to help bring justice, rights and freedom to Palestinian people.  Carmen Souza, Theo Pas’cal, Filipe Melo and Mauricio Zottarelli, please boycott the 26th Red Sea Jazz Festival in Eilat.

Please join us in seeking justice for the Palestinian people under occupation, and also in refugee camps and in the diaspora throughout the world.