Delegates of the Creative Coalition trip to apartheid Israel include:

African-American Giancarlo Esposito (“Once Upon a Time,” “Breaking Bad”);

Dear “Delegates of the Creative Coalition,”

We heard that you plan to travel to Israel on an trip sponsored by  by The Creative Coalition (TCC), a New York-based arts and education non-profit, in conjunction with the American Israel Education Foundation (AIEF), which is affiliated with AIPAC, the US’ most powerful pro-Israel lobby group., Israel.  We would like to ask you to carefully consider the purpose and goals of the powers behind the trip.  We are saddened to see that celebrities, especially African-American ones, are being used and exploited in order to mask apartheid in Israel.[1]

As African-Americans, Alfre Woodard , CCH Pounder , Giancarlo Esposito, and Tichina Arnold, have you heard of the recent “Freedom Rides” in Palestine?  The brave protest action by Palestinian people was inspired by the Freedom Riders of the civil rights movement in the United States, who nonviolently challenged segregation in the American South in the 1950s and 1960s. The basic human right to ride a bus in the country where one lives was being attempted.  The Israeli Army prevented the the Freedom Riders from going to Jerusalem on the bus, and instead arrested and jailed because the bus is for “Israeli settlers only.”

You may not have read the recent findings of the Russell Tribunal on Palestine.  Here is an excerpt, from 7 November.  Read the entire findings at http://bit.ly/svjpBT :

“The Tribunal finds that Israel subjects the Palestinian people to an institutionalised regime of domination amounting to apartheid as defined under international law. This discriminatory regime manifests in varying intensity and forms against different categories of Palestinians depending on their location. The Palestinians living under colonial military rule in the Occupied Palestinian Territory are subject to a particularly aggravated form of apartheid. Palestinian citizens of Israel, while entitled to vote, are not part of the Jewish nation as defined by Israeli law and are therefore excluded from the benefits of Jewish nationality and subject to systematic discrimination across the broad spectrum of recognised human rights. Irrespective of such differences, the Tribunal concludes that Israel’s rule over the Palestinian people, wherever they reside, collectively amounts to a single integrated regime of apartheid.”

We feel that it is our duty to let you know that no matter how humanistic your personal views are, endorsing Israel in the current situation would inevitably be perceived as a political act, namely of supporting or condoning one of the most ruthless and antidemocratic regimes: that which Israel imposes on the Palestinians.

It is because of these policies, and the silence about them from governments around the world, that Palestinians have called for an international boycott of Israel. You will not be allowed to visit Gaza, or the areas of the West Bank that are beyond Ramallah, a sanitized area that shows nothing of what Palestinians face daily disposession, home demolition, land confiscation, imprisonment, torture and death by Israeli soldiers.  All actors with conscience should refuse to be used to uphold the Israeli façade of normalcy.

As we write this to you we are sure that while dealing with the logistics of your trip, your Israeli hosts failed to inform you that barely a one hour drive from where you are scheduled to tour,  nearly 2.5 million Palestinians live under a ruthless occupation in the West Bank.  They are surrounded by an illegal apartheid wall and routinely harassed by armed soldiers. These people cannot leave the confines that Israel has enclosed them in. The travel restrictions imposed on the Palestinians by the Israeli occupation prevent them from traveling on roads reserved for their Israeli neighbors alone.  Hundreds of permanent and arbitrary checkpoints created solely for Palestinians dot the West Bank, and so though you might be able to visit the West Bank as a privileged foreigner, you would never be subjected to the movement control that Palestinians are on their own land.

Only 70 km South of Tel Aviv, over 1.5 million Palestinians in Gaza live in an open-air prison forced on them by Israel.  The recent International Red Cross report on the siege of Gaza demonstrates how terribly damaging it is to Palestinians. [2]  The siege most definitely constitutes human rights abuse. Also, the UN Report of 2009 finds Israel guilty of committing war crimes in its assault on Gaza in 2008/2009, including using white phosphorous on civilians and using human shields. [3] 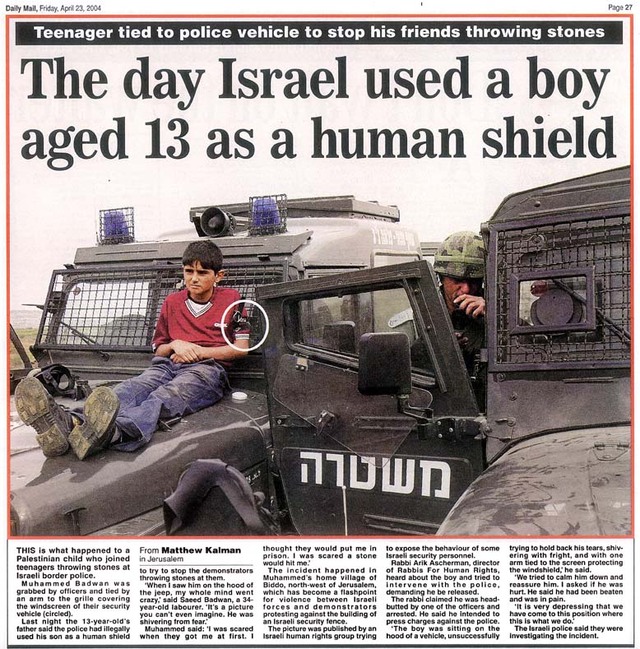 But travel restrictions are only one aspect of repressing those who live under the Israeli occupation.  In fact, the Israeli military regime in the Occupied Territories conducts systematic land expropriation, collective punishments, house demolitions, and mass detainment and imprisonment of thousands of women, men and children, many of whom are the participants of non violent protests against Israel.

Pink Floyd founder Roger Waters said “Where governments refuse to act people must, with whatever peaceful means are at their disposal. For me this means declaring an intention to stand in solidarity, not only with the people of Palestine but also with the many thousands of Israelis who disagree with their government’s policies, by joining the campaign of Boycott, Divestment, and Sanctions against Israel.  My conviction is born in the idea that all people deserve basic human rights. This is not an attack on the people of Israel. This is, however, a plea to my colleagues in the music industry, and also to artists in other disciplines, to join this cultural boycott.

Artists were right to refuse to play in South Africa’s Sun City resort until apartheid fell and white people and black people enjoyed equal rights. And we are right to refuse to play in Israel until the day comes – and it surely will come – when the wall of occupation falls and Palestinians live alongside Israelis in the peace, freedom, justice and dignity that they all deserve.”[4]

Elvis Costello, who cancelled his concert in Israel, said: “Then there are occasions when merely having your name added to a concert schedule may be interpreted as a political act that resonates more than anything that might be sung and it may be assumed that one has no mind for the suffering of the innocent.”[5]

Massive Attack’s Robert Del Naja, when talking about his joining the boycott stated “I’ve always felt that it’s the only way forward,”“I think musicians have a major role to play,” Del Naja says. “I find the more I get involved, the more the movement becomes something tangible. I remember going to ‘Artists Against Apartheid’ gigs, and ‘Rock Against Racism’ gigs around the same sort of time. Bands like the Clash and the Specials had a lot to do with influencing the minds of the youth in those days.”  “The boycott is not an action of aggression towards the Israeli people,” he says. “It’s towards the government and its policies. Everyone needs to be reminded of this because it’s very easy to be accused of being anti-Semitic, and that’s not what this is about.” [6]

[1] See four references below for documentation on apartheid in Israel:

B. Human Sciences Research Council of South Africa (HSRC) study : Israel is practicing both colonialism and apartheid in the Occupied Palestinian Territories (OPT).

D. Israel/Palestine, South Africa and the ‘One-State Solution’: The Case for an Apartheid Analysis

[2] Gaza Closure: Not Another year!

[5] It is After Considerable Contemplation…