Arch Enemy THANKS Israel Lobby “Stand With US” 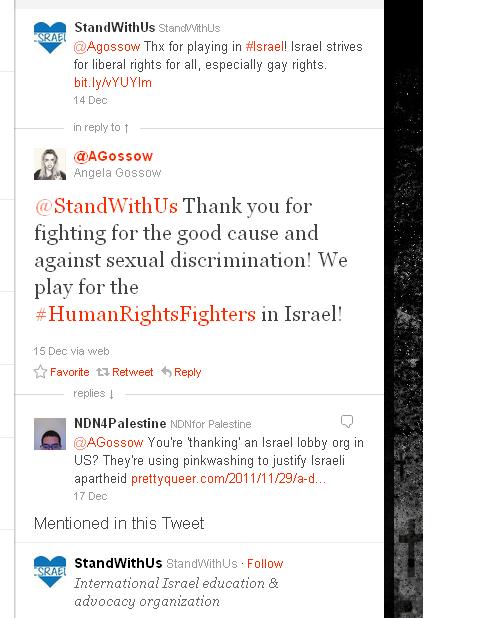 In a shocking display of pro-Israel bias, Arch Enemy’s spokesperson, Angela Gossow, actually THANKS the Israeli group “Stand With Us.”

Stand With Us is infamous for creating the “Captain Israel” comics, especially the ones that portray “BDS” as a venomous snake donning the colors of the Palestinian flag. Stand With Us is well-known to “celebrate” militant Jewish nationalism, at the same time, using the well-funded “pinkwashing” technique to make Israel, Tel Aviv in specific, appear to be very tolerant of gays.  Stand With Us is critical of the flotilla, against Palestinian human rights, and has actually launched “Shame On Turkey” to shame Turkey for its involvement in the flotilla.  But Stand With Us also works very hard to attack BDS volunteers, which is what Arch Enemy worked hard to do in the past month or so.  Arch Enemy’s Angela Gossow and colleagues made sure to eliminate all references to the letter to Arch Enemyfrom the PACBI.  Please read the letter here http://www.pacbi.org/etemplate.php?id=1769  It simply asks the band to refrain form playing in Israel.  By all indications, Arch Enemy appears to be a pro-Israeli band.  Does this seem to fit in well with their anti-fascist persona and progressive reputation?