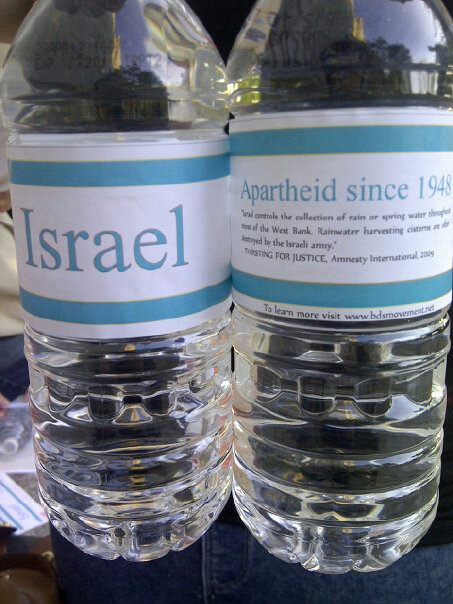 Some creative volunteers found a way to raise awareness about Israel’s apartheid policies on the streets in NYC.  This is a prime example of the creativity and spontaneity of the BDS movement.

Attendees of the Israel Jazz Festival in NYC at the Guggenheim were treated to free water labelled “Israel” on one side, and the other side labelled with the words

“Apartheid since 1948”  and then explains Israel’s policy of water theft, where Israel controls the collection of rain or spring water throughout the West Bank, while rainwater harvesting cisterns are destroyed by the Israeli army.  “THIRSTING FOR JUSTICE, Amnesty International, 2009″  and “To learn more visit www.bdsmovement.net” are also written on the blue and white label.

The Guggenheim acknowledged that the festival was part of the Israeli government’s effort to whitewash apartheid when it wrote:

“A Festival of Israeli Jazz & World Music will take place in New York May 7–18. With thanks to our friends at the Office of Cultural Affairs, Consulate General of Israel in New York, for their support.”

All state supported “cultural” events are part of Israel’s plan to promote a false image and paint white over apartheid, segregation, racism, siege, administrative detention and refusal to allow refugees the right to return to their homes and land.

“We are seeing culture as a hasbara [propaganda] tool of the first rank, and I do not differentiate between hasbara and culture.”

So we heard there’s an Israeli “jazz” festival in Nyc. Since they have “Israeli everything”, we figured we would hand out free “Israeli water”.

Harrabic Tubman Oh my god they are crazy out here but its beautiful watching them drink it then flip out and say to them “oh my god is that what Israeli water does to you?”
[1] See http://www.haaretz.com/misc/article-print-page/about-face-1.170267

A video was posted on youtube on 10 May of the above creative action. ” Existence is Resistance and Artists Against Apartheid along with other organizations came together to offer free Israeli water for the Israeli Jazz Festival.”