As Israel continues to pound the daylights out of the Gaza Strip, several US bands remain committed to entertaining audiences in Tel Aviv.

(Interpol, standing against human rights and for apartheid?  Shame on them)

(Jane’s addiction, newly reunited and committed to playing for apartheid, and ignoring a global call to boycott Israel?  How un-cool)

(below- Blonde Redhead was asked to refrain from crossing the picket line, you  won’t see these boycott breakers with human rights activists.  They’d rather play for apartheid) 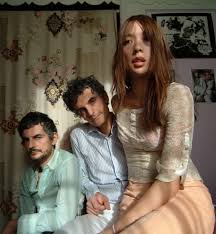 The Israeli solidarity group Boycott! Supporting the Palestinian BDS Call From Within(BFW) recently issued an open letter to the bands urging them to refuse to collaborate with Israel’s apartheid, occupation and racism. The letter states, in part:

Israeli propaganda will gladly announce that you are coming to perform in “the only Democracy in the Middle East”, but your Palestinian fans in the Occupied Territories will not even be allowed to come to Tel Aviv and enjoy your performance. Furthermore, the Pic.Nic festival is produced by Shuki Weiss, who has a special relationship with the Israeli establishment. Mr. Weiss attendedKnesset meetings which have led to draconian anti-democratic legislation to outlaw boycotts, and he sends Israeli politicians VIP tickets to concerts which he produces. This is not just corruption within the system, but corruption that serves to whitewash Israel’s war crimes against the Palestinian people, using international artists such as you.

You have an opportunity to stand with the oppressed. Please don’t play in apartheid Israel, until it complies with international law and ends the occupation over the occupied territories, recognizes full equality for its Palestinian citizens and respects and protects the Palestinian refugee’s right of return to their homes and properties.

In addition to the open letter, a campaign is underway on Facebook to educate the bands about the political reality behind playing a show in Tel Aviv. Activists are encouraging fans of Interpol in particular to write directly to the band’s management, and have have drafted a sample letter, while campaigners with the US Campaign for the Academic and Cultural Boycott of Israel (USACBI) have authored some sample tweets to help solidarity activists publicize the call.

Playing ♫ for Apartheid is not cool,