9/4/11
Dear Denise Jannah and Ramon Válle,
We write you this letter in the hope that you will carefully consider cancelling your September 5-11 concerts in apartheid Israel [1] (Israel practices the three pillars of apartheid).  Fighting apartheid in South Africa was right, and fighting apartheid wherever it raises its ugly face is still right.Your concert at the Israel-government funded Tel Aviv Museum will serve to make Israel appear to be a normal, tolerant “democracy.” This is far from the truth, but the sterilized image of a sparkling clean Israel is all that will remain as a memory of your gig. The hidden truth is very very different. Nightly raids, arrests of children and imprisonment, the ugly apartheid wall, and the suffering of the millions who live under the strict control of Israel in vast walled in ghettos is hidden. Most Israelis cannot even bear the sight of the wall themselves, but Palestinians have been forced to lose access to their own farms, and often -families- as well as their life-sustaining jobs….just so Israel can confiscate more land through the building of the illegal wall. We are attaching these wall photos for you to see part of the pain, and to let you feel one of the reasons you might consider to cancel your concert:We would be happy to send you information about the plight of the Palestinian refugees, beautiful quotes by South African Archbishop Desmond Tutu in support of the Palestinian people and horrendous testimonies of Israeli interrogation.

The recent International Red Cross report on the siege of Gaza demonstrates how terribly damaging it is to Palestinians. [2]  The siege most definitely constitutes human rights abuse. Also, the UN Report of 2009 finds Israel guilty of committing war crimes in its assault on Gaza in 2008/2009, including using white phosphorous on civilians and using human shields. [3]

You may not be aware that Roger Waters has asked his colleagues in the music industry, to boycott Israel.  He says:

“In my view, the abhorrent and draconian control that Israel wields over the besieged Palestinians in Gaza and the Palestinians in the occupied West Bank (including East Jerusalem), coupled with its denial of the rights of refugees to return to their homes in Israel, demands that fair-minded people around the world support the Palestinians in their civil, nonviolent resistance.
Where governments refuse to act people must, with whatever peaceful means are at their disposal. For me this means declaring an intention to stand in solidarity, not only with the people of Palestine but also with the many thousands of Israelis who disagree with their government’s policies, by joining the campaign of Boycott, Divestment, and Sanctions against Israel.
My conviction is born in the idea that all people deserve basic human rights. This is not an attack on the people of Israel. This is, however, a plea to my colleagues in the music industry, and also to artists in other disciplines, to join this cultural boycott.
Artists were right to refuse to play in South Africa’s Sun City resort until apartheid fell and white people and black people enjoyed equal rights. Andwe are right to refuse to play in Israel until the day comes – and it surely will come – when the wall of occupation falls and Palestinians live alongside Israelis in the peace, freedom, justice and dignity that they all deserve.”

The BDS (Boycott, Divest, and Sanctions) movement has reached global proportions and people around the world are joining in solidarity with the oppressed people who live under Israel’s harsh, oppressive, racist apartheid system.  Solidarity is alive and well in Australia, Ireland, the USA, South America, Europe, Japan, Korea, and many other places such as Fiji.It has been noted that you performed a “benefit” concert for the people of Gaza after Israel’s brutal attack. You may want to read the PACBI’s take on artists who want to stand with Palestine but also play concerts in Israel, or visit Israeli institutions. Please visit http://www.pacbi.org/etemplate.php?id=1706 and here is a small except from the 2 September statement:

“Academics and artists must also realize that their mere presence at mainstream Israeli institutions and forums—regardless of the content of their participation, which may well often be critical of Israel—will be used to whitewash Israeli crimes and normalize Israeli oppression.  This is so because violating the BDS call at a time when this movement is growing internationally, as well as in Israel, is far more damaging than making critical statements, especially when those statements are often used by Israel to promote its illusion of a tolerant and democratic society.  This is not to mention that there are numerous ways to address Israelis today, and provide critical insights, without visiting the country and making public appearances.”

We are not asking you to join or be a spokesperson (though we would be thrilled if you chose to) of this dynamic movement.  You are merely being asked to refrain from playing in Israel and thus, endorsing apartheid.  Palestinians are only asking you not to cross the picket line, and hope you will “Dream, Cry, and Fall in Love…” with the vision of an apartheid-free Israel.

Over 200 artists in Ireland have signed a pledge to boycott Israel.  [4] These artists refuse to allow their music to be exploited by an apartheid state that disregards international law and universal principles of human rights, but look forward to the day when normal cultural relations can be re-established with an Israel that fully complies with such laws and principles. Playing in Israel truly is a political statement in support of apartheid, and against human rights.  Please be aware of the Israeli Foreign Ministry’s statement in 2005 that “We see culture as a propaganda tool of the first rank, and…do not differentiate between propaganda and culture.”

In the light of last year’s murder of humanitarian activists by the Israeli military and the ongoing illegal and immoral siege of Gaza, as well as the occupation of Palestine, it is profoundly important that Israel not be allowed to profit from artists visiting the state until it upholds international law.

Our sincere hope is that you will refuse to cross the picket line drawn by the Palestinian call for cultural boycott and cancel your concert plans in Israel. 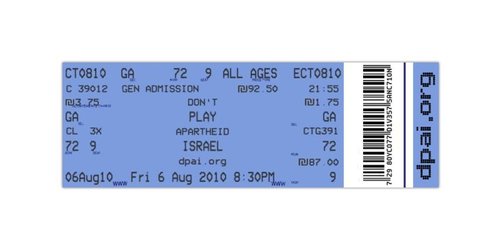 We are a group, of over 745 members, representing many nations around the globe, who believe that it is essential for musicians & other artists to heed the call of the PACBI, and join in the boycott of Israel. This is essential in order to work towards justice for the Palestinian people under occupation, and also in refugee camps and in the diaspora throughout the world.

[1] See references below for documentation on apartheid in Israel:
Human Sciences Research Council of South Africa (HSRC) study : Israel is practicing both colonialism and apartheid in the Occupied Palestinian Territories (OPT).
http://www.hsrc.ac.za/Media_Release-378.phtml

Israel/Palestine, South Africa and the ‘One-State Solution’: The Case for an Apartheid Analysis
[Bakan, Abigail B. and Abu-Laban, Yasmeen(2010)
http://www.informaworld.com/smpp/ftinterface~content=a931468637~fulltext=713240930~frm=section

Do Israel’s practices in occupied Palestinian territory, namely the West Bank, East Jerusalem and Gaza, amount to the crimes of colonialism and apartheid under international law?