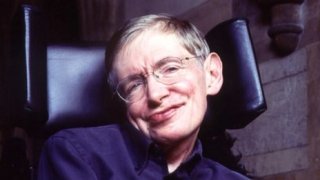 A momentous boost for Palestinians and the pro-Palestine movement in the decision of renowned professor of physics/cosmology Stephen Hawking to boycott the Shimon Peres Presidential Conference in Israel.

While actual justice for occupied and besieged Palestinians may still seem many political ‘light years’ away, this declaration from such a notable and respected figure represents a kind of ‘quantum leap’ in thepopular projection of the Palestinian cause.

As confirmed by Cambridge University, Hawking has acted in specific support of the academic boycott movement:

“I have received a number of emails from Palestinian academics. They are unanimous that I should respect the boycott. In view of this, I must withdraw from the conference. Had I attended I would have stated my opinion that the policy of the present Israeli government is likely to lead to disaster.”

Israel and its supporters have reacted with dark hostility, some of the criticism disgusting and vitriolic.

Besides serving to expose such virulence, Hawking’s decision and reaction to it has all been to the good in stimulating the boycott and raising awareness of the actual arguments.

5. It serves to counter ‘Brand Israel’, the state-cultural effort to whitewash apartheid and ethnic cleansing.
4. It helps expose the hypocrisy of those like Shimon Peres, a war criminal masquerading as a dove.
3. It shows that boycott is perfectly consistent with, not against, dialogue, serving to open up discussion of the occupation rather than engage in protective/excusing words.
2. Rather than allow impunity, it offers a tactical means of making Israel accountable for its crimes.
1. Above all, it recognises that Palestinian civil society is itself asking for BDS.

Ali Abunimah, a key advocate for BDS echoes all these points, rejecting, in particular, the spurious claim that it diminishes ‘dialogue’ and the ‘peace process’:

“One of the most deceptive aspects of the so-called peace process is the pretence that Palestinians and Israelis are two equal sides, equally at fault, equally responsible – thus erasing from view the brutal reality that Palestinians are an occupied, colonised people, dispossessed at the hands of one of the most powerful militaries on earth. For more than two decades, under the cover of this fiction, Palestinians have engaged in internationally-sponsored “peace talks” and other forms of dialogue, only to watch as Israel has continued to occupy, steal and settle their land, and to kill and maim thousands of people with impunity.”

For Abunimah, Hawking’s laudable decision is no less than “a turning point” in international support for a public boycott. Phyllis Bennis has described the independent evaluation of this greatest living scientist as “huge” in its significance, particularly as Hawking was asked as the keynote speaker at the Peres conference, an event of key importance in promoting and branding Israel.

And there’s little doubt that Israel is deeply concerned about such a prestigious figure taking such an open position. Suddenly, someone who has been revered for his brilliance to science and human understanding is now pilloried for his rational arguments and humanitarian actions.

Faced with such notable stances and the confidence it offers others to follow – the upcomingunder-21 UEFA championships in Israel providing another key test for the regime, as dissenting players join other public and cultural figures – Israel’s advocates are engaged in a gathering damage limitation exercise.

Uneasy about denouncing someone of Hawking’s stature, some have sought to belittle such ‘signatures’ and, just as deceptively, criticise the ‘selectivity’ of given causes.

“It’s disingenuous, investing one signature with the weight of an entire political approach, and implying that because of a person’s notoriety, their pronouncements are gospel instead of what they are – the views of someone no more or less informed. Many causes need glitter to get a hearing. The Rohingya Muslims, for example: their plight rarely makes the front page. George Clooney brought Darfur to the world’s attention. You can say plenty about Gaza, but you cannot claim it is ignored by the mainstream media.”

But who is claiming such ‘investment’ as “gospel”? What’s “disingenuous” about a person, any person, giving their name to a just cause, one that they’ve thought conscientiously about? And precisely where are we seeing all these people like Clooney standing up for Palestine or any other issue/cause/state not approved of by the West? If they do, they’re at risk of political-cultural ostracism and career decline.

Patronisingly, Lipman asserts that the issue is too complex for ‘easy avoidance’ of the ‘facts’:

“The Israeli-Palestinian conflict is extraordinarily complex. It requires activists with a vested interest to focus on the facts, to aim for more than point-scoring, and consider the real questions – how to end the cycle of violence, for one, and how to educate people on both sides as to why two states is the answer – not which celebrity agrees with them.”

Whose ‘facts’, one wonders? These will, no doubt, be those ‘all-important’ Israeli ‘facts on the ground’ – the settlements, the wall and all other aspects of the occupation and siege – that we’re asked to recognise.

And why the ‘educational imperative’ that a two state solution is the only answer?  Or is Lipman afraid that even the ‘average observer’ is able to see the other much fairer, but more troubling, option for Israel: one state built on equal democratic rights for all citizens, all people?

Nor can Lipman avoid the familiar ‘dialogue’ trope:

“What the Middle East desperately needs is dialogue, which is why I believe a boycott cannot offer a constructive approach. The discussion could well benefit from meaningful interventions from intellectuals like Hawking, but these must go beyond headline-grabbing.”

Thus, advocates for Palestine are merely “headline grabbing” in applauding Hawking’s position. Deductively, Hawking, as another clear and willing advocate, must also be engaged in such “headline grabbing” rather than considered thought on what Lipman and others would have us believe is a ‘complex’ matter.

Perhaps she thinks even someone with the mind to grapple quarks and black holes is somehow unable to grasp the relatively simple equation that Israel’s occupation is illegal, that its apartheid policies are indefensible and that its refusal of justice is deserving of the civil-humanitarian responses given by Hawking.

“The notion according to which the horrors in Syria or Darfur make ending the occupation a less worthy cause represents the worst kind of moral relativism, especially when it’s being voiced by members of the occupying society.”

“Yet the thing that made Prof. Strenger jump is not “any action” but rather something very specific – the academic boycott. Personally, I think that his text mostly portrays a self-perception of innocence. Israel, according to Strenger, doesn’t deserve to be boycotted and the “liberal academics” – like himself – specifically, don’t deserve it because they “oppose the occupation.” At this point in time, I think it’s impossible to make such distinctions. The occupation – which will celebrate 46 years next month – is obviously an Israeli project, to which all elements of society contribute and from which almost all benefit. The high-tech industry’s connection to the military has been widely discussed, the profit Israeli companies make exploiting West Bank resources is documented and the captive market for Israeli goods in the West Bank and Gaza is known. Strenger’s own university cooperates with the army in various programs, and thus contributes its own share to the national project.”

Some other ‘left’ opposition to Hawking’s decision is based on a crude misrepresentation of the BDS movement itself, citing its ‘driving one state’ view and ‘goal’ of destroying Israel. As should be patently clear, this, as Abunimah shows, is part of the same pernicious Zionist myth:

First, the facts. The 2005 Palestinian BDS call makes absolutely no mention of one state or two. It is not a call for a political “solution.” It is a rights-based call with three clear demands of Israel:

(1) Ending its occupation and colonization of all Arab lands and dismantling the Wall
(2) Recognizing the fundamental rights of the Arab-Palestinian citizens of Israel to full equality; and
(3) Respecting, protecting and promoting the rights of Palestinian refugees to return to their homes and properties as stipulated in UN resolution 194.

Second, any informed person would know that the vast majority of organizations represented on the Palestinian Boycott National Committee (BNC) – the movement’s steering group and collective leadership – explicitly support a two-state solution.

Plainly, BDS is not a ‘solution-based’ organisation, simply an inclusive vehicle for opposing the occupation and a means of garnering broad support for it through a particular strategy.

In all these regards, Hawking’s decision to boycott is of vital worth, both in its moral integrity and in its logical reasoning. It’s a sign of Israel’s deepening concern that its proponents have little in response but lame, fabricated and misleading arguments.

For Hawking, BDS and anyone else concerned about realising an end to Israel’s brutal occupation and oppression, the point is not just to keep talking, but to keep talking about the core issue of injustice and how we transcend the artificial call of ‘dialogue’.